Directly after I leave Lock 1, the Phoenix wall appears.  It`s a beautiful facility the town has setup for boaters.  There is power and water right at the wall.  Although the power connections are only 15 amps and the town asks you not to use your air conditioning, the charm of this place more than makes up for this small shortcoming. There is also a free pump out available.  The park adjacent to the wall is well maintained with adult tricycles to borrow, picnic tables, Muskoka chairs, and lovely flower beds. There are also many patio tables with nice comfy chairs and umbrellas available to the visiting boater right on the wall. Bathrooms and showers are not available on weekend or after hours but the atmosphere of this place more than makes up for this inconvenience.
Ducks of all sorts abound around the duck feeding stations rights there in the park. These stations are set up to encourage the ducks to call this spot home.
Although this town, like so many, has been hit hard by the recession there is still evidence of pride in America throughout the harbour area.  Houses are being maintained, American flags are flying, and a good natured spirit lives strongly here.
A must for breakfast is Larkins.  It’s gotta be one of the friendliest places in the area.  A big appetite is needed to finish a regular sized order.  Perhaps I should have chosen a small plate.  The servings, in my opinion, are huge.
Groceries and basic supplies can be obtained 2 blocks north at the Nice & Easy.
To explain the attitude the town has towards visitors I offer an excerpt from the town mission statement printed on visitors pamphlets “To serve all tourists that visit our canal site, to offer hospitality to tourists and townsfolk …” They certainly live up to the mission statement, from locals living along the canal who offer directions when needed, to police officers that are quick to stop, talk and tease tourists in a light hearted, friendly manner. 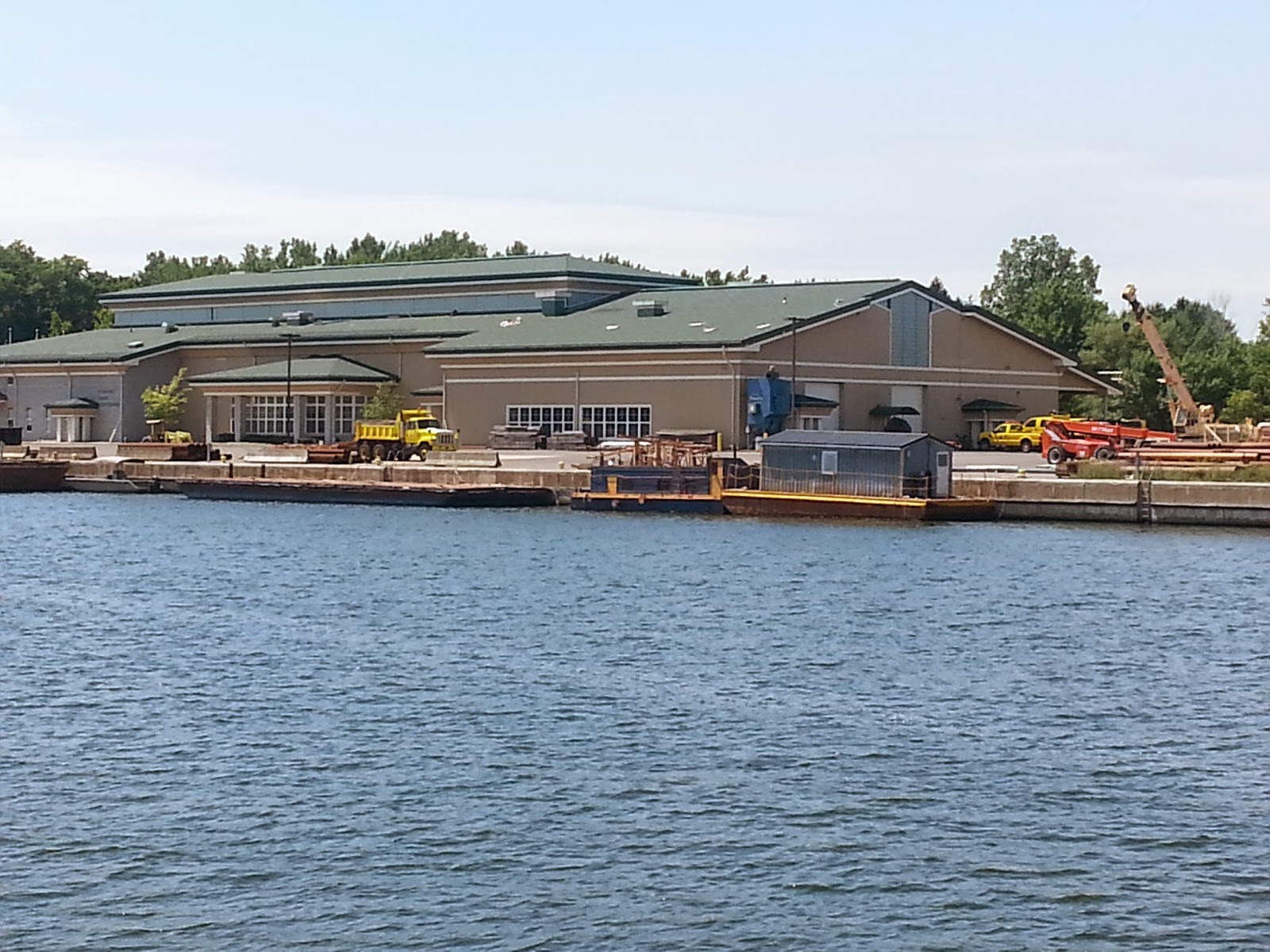 Leaving Phoenix you pass a nice new canal maintenance center filled with tugs and barges. You can’t miss it.

And now I leave the Oswego Canal, heading for the Historic Erie.

Traveling south from Minetto and Lock 5 along the Oswego River I pass Battle Island.  I keep to the left in the river to go around the island, as recommended, and have no problems, however I think that if I had passed to the right I would have been ok as well.  I pass big homes and estates interspersed with smaller, older homes, reminiscent of life gone by on the island.  Looking left and right there is evidence of the old canal.
As I continue traveling south, the homes become smaller and the river becomes more rural.   By the time I get closer to Fulton I notice the houses remain in the earlier 20th century style of home, built during the
hay-days of the canal when commerce was flourishing and people made their livings from use of the canal and towns such as Fulton prospered.  Fulton is a typical riverside town with small businesses of a community living alongside the river.
As I approach Lock 3, I do have to be careful of the spillway because it will push me around.
Right after exiting Oswego Lock 3 (no, I didn`t skip Lock 4, there isn`t one for some reason), I come to Fulton. On the east side of the canal is a small harbour carved out of the canal wall, with very little room to
manouvre. There are quite a number of finger docks all with power and water, if I were to go back, I wouldn’t try the fingers because there is not enough room to manouvre larger boat, say anything over 27 ft.  There is room on the wall at the entrance to this harbour for about two larger boats.  The wall would have been the better choice to park for a short visit.

The town square, just up the steps from the docks, is nicely done, with flowers and wide interlock stone pathways for strolling.  From this pathway I easily access the shopping district, with the availability of some groceries and other necessities.  Every Saturday during the summer, in the parking lot, there is a small farmers’ market, with fresh produce, baked goods, flowers and other items like hand made candles and soap to purchase.  While the booth owners are friendly, the residents don’t seem to be as accomodating to strangers and less than enthused about seeing dogs on leashes (and thoroughly well-behaved) in the market area. 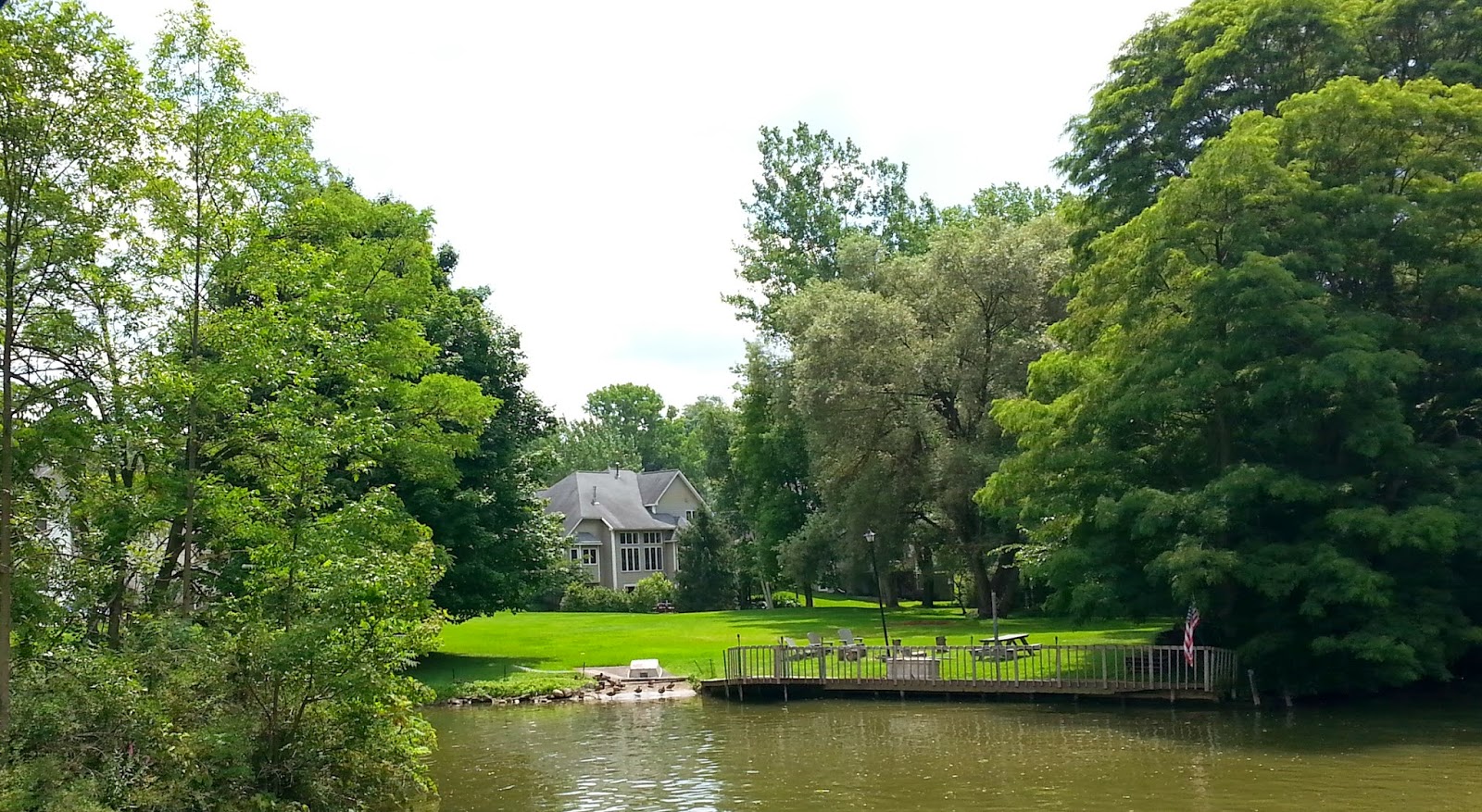 Once again on my way and approaching Oswego Lock 2 the riverside houses become larger and more luxurious.  The grounds surrounding them (they are too big to be called yards) are as neatly tended as golf courses.

The Loop From Here